The Skegness based firm of Wrates were involved in the Walking Picture trade for around fifty years. They began as photographers in the Victorian era, and during the season offered while you wait portraits in a tent on Skegness beach. As well as their other work (and they also did regular postcards for sale in local shops) Wrates appear to have begun taking walking pictures in the 1920s and Skegness provided plenty of customers (thanks in part to the efforts of Billy Butlin who started with an amusement park here and a nearby holiday camp during the 1930s). Wrates opened a shop on Lumley Road, which leads down from Skegness railway station to the famous clock tower and the seaside attractions beyond. People could see and buy their walkies here. 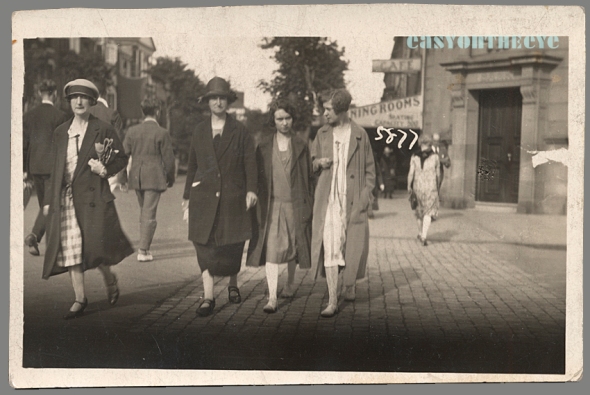 This early Wrates walkie dates from the 1920s. The firm were numbering their negatives by hand, in this case right in the middle of the photo. The central trio from left to right are Mrs Patchet, her daughter Edith Patchet (Isabel’s lifelong friend), and Isabel Gould. The photo was loaned to me by Ken Hawley, Isabel’s son. The woman on the far left – giving the cameraman a look – was not part of the group.The photo was taken on the corner of Lumley Road and Lumley Avenue looking away from the coast; the bank building is still there, a branch of HSBC now. The cafe building behind (which seems to be advertising a dining room with 300 seats) has been replaced.

When the pier entrance was redeveloped in the late 1930s Wrates moved in to a shop on the right hand side of the steps and remained until the (by then listed) deco entrance was scandalously demolished in 1970. The Lumley Road premises remained (the firm also had a post office in store for a while) but it was The Pier address which featured on their wallets. Most of the pre-War Wrates walkies carry the firm’s name – A. E. Wrate – and kiosk addresses on the back (and some on the front in the 1950s) and all were single image postcard size prints. Paul Godfrey adds that purchase tax – introduced during the War – judged postcards to be luxury items. By dropping the postcard design on the back they avoided the tax.

Looking like it was taken on one of the Parades, the only identification is the caption on the back which says “Mab & Enid, Tilly Cooper & I”. The fancy wooden railings look like an entrance to a park. It’s another quite early card, though Wrates have now masked a corner of the image in the camera to write the numbers on. The very crude way the card has been cut may be due to pressure in the print room. The drawing pin holes perhaps indicate a card which has been displayed on a Wrates kiosk board to be viewed and purchased.

The Wrates ‘beat’ included the pier to begin with, but after that walkies were taken of people striding past the pier entrance (see below) or on the Tower Esplanade, which led from the clock tower to the beach (many of their cards show the tower in the background). Wrate’s also had a favourite spot on the corner of Lumley Road and Rutland Road, with the shoe shop of G. Blackbourn in the background of many (“Tennis, bathing and beach shoes.” It closed only recently and is now a branch of Subway).

A Wrates walkie taken right outside the pier entrance on a sunny afternoon in the early fifties judging by the woman’s fashion. The firm have now installed automatic numbering on their cameras. There is clear evidence of rushed work in the processing on this print, with drying marks and even finger prints left on the negative. We do not know who the couple are.

Wrates also covered the Grand Parade, which runs parallel to the beach, photographing people walking into town from the many streets of boarding houses. One feature of their business which locals remember are the Wrates Girls, who took walkies during the fifties and sixties. Dressed in shortish skirts and striped blazers, they covered the North and South Parade, the area round the clock tower and the beach.
Wrates sold their walkies inside printed paper wallets and often these survive with the photograph inside. The design on the front changed over the years, with images of the clock tower, the famous Jolly Fisherman, seagulls and other coastal imagery, with prices on the back. Early post-war cards were sold at 1/-. After 1953 the price crept up to 1/3d then 1/6d. Wrates also offered three cards for 2/6 (plus 2d for the wallets), or one enlargement for 3/-. Two of the various designs are shown here, the red and blue one housing a colour walkie. John Barcock remembers holidays there in 1945/6 – “There was a photo snapshot service on the promenade and the photographer would snap you whether you wanted or not, and hand you a ticket number to collect the prints a few hours later.” 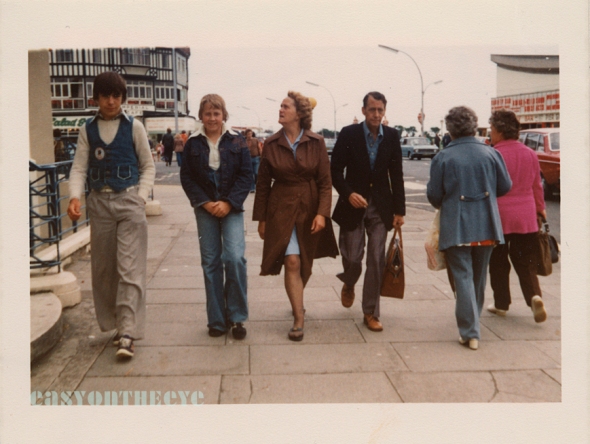 One of the later colour walkies from Wrates, dating we think from the early 1970s. In the background is the Imperial Cafe (and Grosvenor House Hotel), which still stands on the corner of Scarborough Avenue and the Grand Parade, right opposite the pier entrance (the building on the right). The Tudor-bethan building can be seen in the background of many Wrates walkies over the years. In the photo are members of the Stone family: David Stone (in the denim jacket), Frances and Raymond Stone, his mum and dad. The lad on the far left is a friend of David, dressed in Wigan Casino style clobber (with what might be a Casino patch on his natty denim waistcoat). My thanks to Susan Stone for the photograph.

Wrates were one of the few firms which moved into colour walkies, which appeared in 1968. These sold for 2/- and were half postcard size, still sold inside a paper wallet. The latest I have dates from the early 1970s.

After the War Wrates expanded to Mablethorpe (and were still there in the 1970s) and also had a kiosk at Chapel St. Leonards (see below). Perhaps by this late date improvements in transport and processing enabled the walkies to all be processed at Skegness. In 1962 Wrates diversified into schools photography, taking individual and class photographs, but kept on with the walkie trade. They appear to have stopped taking walkies in the mid-1970s to concentrate on their day to day film and developing business and their commercial work. The company was taken over in 1980 by several of the former employees. At this time they still had a shop on Lumley Road, and were renamed ‘Wrates of Skegness (1980) Ltd’  (Wrates never used an apostrophe on their wallets).  Happily the firm are still in business today (located close to the original Lumley Road shop) doing a wide variety of school portrait work all over Lincolnshire and also have a studio for the general public. One of the fifth generation of the Wrate family, Martin, is managing director.

Wrates had a number of rival walkie firms in Skegness over the years but none stayed the distance. Walfred Photographic was one, started in 1948.

See also Skegness Pier, Sheffield On Holiday and Wrates Coronation for more examples. Also Tower Esplanade for information on a popular spot with the walkie cameramen and women,