Spotlight (GB) Photos have been difficult to research. I have a number of cards by the company, all of which are clearly marked on the reverse with the firm’s name and what we assume to be the company registration number. Spotlight walkies are standard postcard size (and postcard back layout – the later cards add the initials G.B. to the company name) with three consecutive images, generally with the film sprocket edges along each side, on which the negative reference number written onto the film after developing can be seen.

It does look as if Spotlight operated in a number of different locations. Cards by them have been identified as being taken in Felixstowe, Derby, St. Annes, Margate and Edinburgh. I have recently found one which was taken in Westcliffe On Sea near Southend in 1929 / 30. Given this it looks as if they either opened operations in these places or perhaps worked on a franchise basis supplying equipment, film and paper.
If you compare Spotlight cards with those from other firms using movie cameras, such as Barkers Cine Snaps, I do think the Spotlight ones are less well taken. This might indicate camera operators with less experience of the equipment and process and support the idea of a franchise set-up. Despite this the surviving Spotlight images are amongst my favourite walkies looking as they do like fragments of lost films (hence the firm’s name?). I assume this movie feel was also part of the attraction for buyers. Technically the images are often not great, although this doesn’t seem to have put people off buying them. One I have consists of two frame surviving from one Spotlight card where the street is empty and the subject is half glimpsed walking out of shot. I assume the missing frame is the one which did manage to get all of him in view.

I have puzzled over the way the sprockets are so clearly visible. If you print an image to get a good range of tone, then by default the film edges would normally be almost black and hard to see. So it looks as if these edges were deliberately underexposed during the print process, by using a mask of some sort. It might be that this was their USP. You can see this best on the Edinburgh image on this page, where the masking is erratic (and incidentally the name of Kodak is also visible).
Although most people stuck with the postcard prints bought on the day, Spotlight do appear to have offered enlargements, about double postcard size, with the three frames on.
Most walking picture firms worked in one town or if they did expand, generally they stuck to towns next to one another (Sunbeam being a good example, starting in Margate but expanding to other towns along this part of the East Kent coast including Westgate, Cliftonville, Broadstairs and Ramsgate.).

If we’re correct, Spotlight would seem to be the only walking pictures company to have had national ambitions. Perhaps the directors looked at the growing popularity of walkies and decided it was a business model they could profitably apply on a broader scale.
All the Spotlight cards I have seen appear to be from the 1930s. The earliest date from 1932/33 and research shows that the firm went into liquidation after just a few years. It appears their head office was at 261 Pentonville Road, as it was here that a meeting of the firm in 1937 agreed that they were operating at a loss and should be wound up. One of the board members, William Radford Hughes, undertook the task. 261 was redeveloped fairly recently (and is now a conduit for the Kings Cross St. Pancras Underground complex).
The images here are typical of those from Spotlight. The Derby image is courtesy Brett Payne. The image of the gent in his Oxford bags and the lad with the toy yacht is, we assume, from a coastal resort, but we don’t know where. It has been sent by Sarah Norris. The three women with their child, who is skipping along with beach bucket and spade, is from St. Annes On Sea. The shot of the little girl pushing her doll’s pram below is from Edinburgh, taken on North Bridge.

If anyone has prints by this firm or can shed any more light on them please drop me an email. There is another unidentified Spotlight card on the site here. 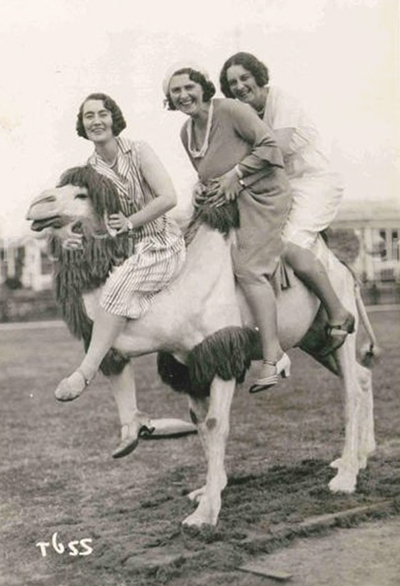